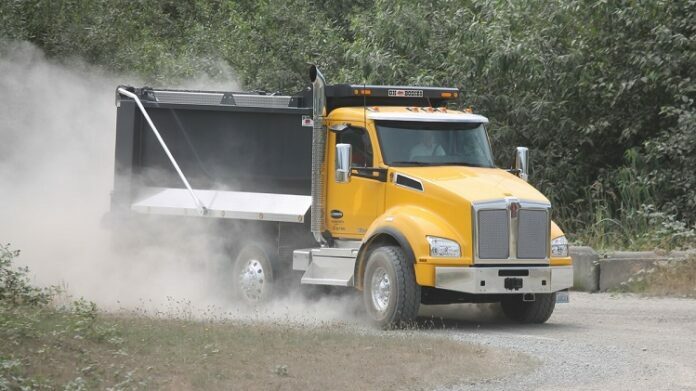 One of the more unpleasant aspects of driving a flatbed rig is deploying tarps prior to departure. Truck drivers use tarps to protect their cargo against the weather, road debris, animals, etc. And unfortunately, tarping a load is a time-consuming exercise. It is made more difficult under windy conditions.

A truck tarp becomes a giant sail whenever the wind blows. Even a slight breeze can be enough to make tarping a load more than a trucker can handle. So what does a truck driver do? He or she finds a way to overcome the wind while staying as safe as possible.

Below are some tips for deploying truck tarps under windy conditions, compliments of Ohio-based Mytee Products:

One of the easiest things truck drivers can do is block the wind by moving their trucks. For example, there may be open space on the side of a warehouse the driver can pull his/her rig into. Using the warehouse to block the wind creates calmer conditions for tarping.

Of course, this solution is dependent on being able to find a large building. If no such buildings are available, truckers can still try to block as much wind as possible by parking next to other trucks, large trees, etc.

Another suggestion is to use a rub rail ladder instead of climbing up on top of the load. Climbing on a load is never safe but doing so while battling the wind makes tarping more dangerous. A ladder still gives the driver access to the top of the load with less risk of falling.

An extra benefit derived from using the ladder is found in anchoring the side of the tarp to the ladder – in an upwind direction. The tarp can then be unfolded, with the wind blowing across the trailer helping to keep the tarp extended to the other side of the load while it is being secured.

Still another idea is to unroll the tarp completely on the ground. Leaving it folded, turn the tarp upside down and secure one of the corners closest to the trailer using a bungee strap or binder. Then secure the corner on the opposite end.

The driver can then tie a piece of rope to the outside edge of the tarp, walk around to the opposite side of the trailer, and pull the tarp to him/her. The binders or bungee straps at the corners will keep the tarp in place until it is completely secured.

Mytee Products says the key to tarping in the wind is unfolding at the right time. A properly folded tarp is folded into three sections along its length. It is then rolled up much like a sleeping bag. This sort of arrangement allows a driver to unroll the tarp across the top of the load under normal conditions, then pull the folds open and secure the sides.

Under windy conditions, it is best to unfold each side separately and incrementally. Unfolding all at once only encourages catching the wind and blowing the tarp away. Unfolding incrementally gives the trucker the opportunity to secure the tarp at various points as he/she moves along its length.

Tarping in the wind is by no means easy. Hopefully the tips contained in this post prove helpful. If you are a flatbed truck driver, you have it a bit harder than your dry van counterparts. Please be safe when tarping. Deploying tarps is a leading cause of injury among truck drivers. Be careful and don’t hurt yourself.

The age of rapid and rampant development and digital advancement

Things to Expect from your First Driving Lesson

Know The Difference: Different Types Of Tyres Available In Market