When driving, people tend to rely on their own vision which is hampered during extreme weather conditions and also during the night. Driving during these conditions can lead to accidents, often leading to loss of lives. This makes the necessity of headlights mandatory. Although vehicles come equipped with these, but what if more illumination is required? The OEM installed lights are not able to project powerful light beams. What’s needed is an illumination system that can facilitate a driver to see clearly through mist or fog.

Presently, the projector headlights are quite popular among vehicle owners. These are different from the usual car lights because they are in-built with spherical lens that focus the light produced from the bulbs in the form of a more powerful beam. This not only allows a driver to see clearly up ahead but also facilitate the vehicles behind to see the car being driven.

How Do These Projector Car Lights Work?

These lights have a condenser lens fitted in front of the lamps. In between the lens and reflector, there is a shade which offers a low beam cutoff. It is the position and shape of the shade that determines the sharpness of the cutoff. Often, on removing these shades, the light produced is of high beam. Also, for reducing the sharpness of the light, the lenses make use of Fresnel rings. Likewise, the rings can be adjusted or installed in such a manner as to direct the light beam for illuminating road signs.

With so many variations of the projector headlights present in the market, vehicle owners are free to choose whatever type of auto light they require as per their budget and requirement. You can also seek suggestions for other vehicle owners about the type they would suggest. 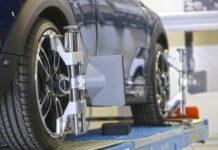