Having a family means making sacrifices, and for many people, that often means giving up powerful sports cars for more family-friendly sedans and crossovers. However, some automobile manufacturers have come up with the perfect compromise. When you buy Mercedes Benz C-Class or the Porsche Cayenne, you get all of the room you need for your family without sacrificing power or style.

People around the world know Porsche for their beautifully unique and powerful luxury cars. In 2002, the company proved that it could produce family-friendly automobiles with the popular Porsche Cayenne. This midsize crossover SUV offers several different models and engine sizes in different price points, and while many of them are out of production, Porsche still makes the original flagship Cayenne along with a hybrid version.

Porsche also created the Transsyberia model as a racing car to enter the Transsyberia Rally. Although they only made 26 at first, they ramped up production and created a street version following their 2009 victory.

When you prefer a four-door sedan with all of the power of a sports car, look no further than the Mercedes Benz C-Class. These beautifully luxurious vehicles offer anything from a four-cylinder to a V8 engine to provide varying fuel economy and power. They contain some of the newest technologies in entertainment and navigation, as well. The models in the C-Class include:

When you do not want to sacrifice power and sport for family size, consider the Mercedes Benz C-Class or Porsche Cayenne. You can find these and other models in various used model years online through Canadian classified sites. They truly put the power in your hands while giving you plenty of room for a growing family.

3 Important Times When You Should Consider Buying A New Car 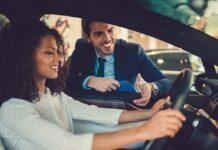